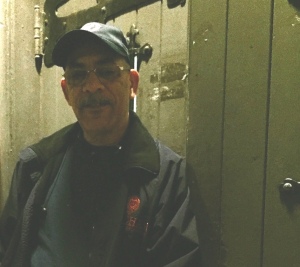 The ubiquitous white vehicles with maroon details and blue uniforms with red embroidery sometimes fade into the background for Fordham students, who become accustomed to the presence of maintenance workers with far longer tenures than them. In the shadowy doorway of Larkin Hall at night, Jose is hidden from most angles except for the glow of his cigarette and the glint of light on his glasses.

Jose was born in Santiago, Dominican Republic, in 1954. He grew up there, and met his wife in school. They were engaged and married shortly after completing their educations. They had three children, whom Jose describes as joys of his life. When in the Dominican Republic, Jose was a tailor. He enjoyed the craftsmanship involved with the job, but said that the most important thing was that it put food on the table.

In 1984, Jose and his family moved from the Dominican Republic to the United States. They first settled in Spanish Harlem, but later moved up to the Bronx. When asked what his first job in New York City was, Jose said he could not even remember with a laugh. He said he had many jobs, the most memorable being a factory in Brooklyn when there was still manufacturing, and a taxi driver. Around age 40, Jose began to work at Fordham in maintenance.

Jose cleans the lab building for the biological sciences, and has done so for a long time. He’s worked at Fordham around 20 years, and loves working here. When asked why, he described his work environment as a family. He feels that people look out for him, like his coworkers in Facilities, Public Safety, academic staff, and administration. His own family are not unfamiliar with Fordham—two of his three children are graduates of the university. The elder is a doctor, the other is in business administration.

After asking after his dreams for his kids and himself, Jose said his dreams are almost fulfilled. He is still with his wife after almost 40 years, and his children are successful and happy. His pride is that that they do not depend on him; in fact, they help their father out as much as they can and say they pay him back for his hard work. Jose would like to finish out his working life at Fordham, then retire and spend the rest of his life with his wife. After our interview was finished, he told me he wished the same thing for me, a life filled with love.