The night air has a certain quality to it. Over the years I have seen people become intoxicated by it. Everything changes at night. Qualitative and quantitative perceptions change after the midnight hour. Soon, a quite sets over the city; people vanish from their pursuit of the vain and tawdry. A stillness overcomes your perceptions and your observations become keenly aware of activities not seen during daylight. The ubiquitous scrum of traffic no longer dominates the urban sprawl.

As a night driver in the city, you develop a relationship with your surroundings. The delivery man unloading milk behind the supermarket becomes your friend even if we have never spoke. This is where I often sleep while waiting to be summed by the $2.40 a mile idol starring at me from the dashboard. Strangely, he has never been my friend. More like a prison guard, always watching but only capable of doing what its been told to do. Seems appropriate for cab driving becomes a form of incarceration.

All is well tonight untill the guy in the street sweeper truck awakes me up with a sound louder than a jet engine. What gets me is the parking lot looks no cleaner after he’s done. Whatever happened to a broom?

The Port of Seattle and the big corporate airlines like Alaska depend on ground transportation services like taxi and shuttle drivers. And yet, we struggle to make a living. Just to have the privilege of picking up customers at our airport, we pay fees to Yellow Cab and to the Port of Seattle. Before I start work on Monday morning, I am already hundreds of dollars in debt. I have to work 12 hours a day and 6 days a week just to make ends meet.

It’s not right. That’s why I’m standing together with all workers for fair pay and respect.

Reprinted with permission from It’s Our Airport.

I talked about driving a cab long before I went to taxi school. In zines, blogposts and Facebook comments detailing my experiences as an Uber-Lyft driver, I wrote about a quest for legitimacy. On Twitter, I lambasted the predatory business models of the “sharing” economy and constantly tweeted my ambition to drive a real cab. After a while, it was too late to back down.

I’d read the list of requirements on the SFMTA website several times but going through the intensive process was a daunting task. It’s not easy becoming a cab driver in San Francisco.

Fortunately, Thomas Canne, a DeSoto driver, approached me on Twitter and answered all my stupid questions. Then Mansurel, a former cab driver I’d met at a protest outside Uber headquarters, introduced me to Jacob Black, who guided me the rest of the way to National/Veterans. Since the first step to becoming a cab driver is taxi school, he gave me the number for the Taxi Driver Institute.

END_OF_DOCUMENT_TOKEN_TO_BE_REPLACED

On most days I was Yellow 698. When I opened the door for you to climb into the back seat of my cab, that’s all you knew about me. Okay, you knew my name—assuming that you glanced at my license—but you didn’t know if I was driving Houston’s streets on two hours’ sleep, if I had a handgun tucked under my seat, if I was a paroled felon, or if I planned to cheat you.

If you happened to get into Yellow 698, you were relatively lucky. I wouldn’t cheat you, I didn’t own a gun, and I’d never been arrested. But usually I had had very little sleep. To keep the cash flowing at home while I got my fledgling advertising agency off the ground, I drove a cab. The job was dangerous, the hours long, the wages low, and the social status somewhere just below shoeshine boy. But I was my own boss of my own business.

END_OF_DOCUMENT_TOKEN_TO_BE_REPLACED

One of the little side-benefits of driving a cab in New York City is that you occasionally have a window presented to you through which to gain an insight into major world events. For example, to go way, way back, I once had a military man in full uniform get in my cab who was en route to New York’s Sloan-Kettering Hospital. It turned out he was a general in the army of the overthrown Iranian government who was going to visit “His Excellency” in the hospital. “His Excellency” was the Shah of Iran who had been overthrown by the Islamic revolution and was at that time receiving treatment for cancer at the hospital (from which he died shortly thereafter). I didn’t have a conversation of any substance with this military man, but his seriousness, his stiffness, his continuing to wear the uniform of an army that no longer existed as a show of respect for the deposed Shah, and his use of the term “His Excellency” have remained with me all these years. An abstraction had been given some mass, a face. Whenever the Iranian situation was mentioned after that I could think back on this ride and get a feeling for the way it was, just based on the way this general in my cab carried himself.

I had a ride like that a few days ago.

I picked up a young man in Manhattan who was headed for Kennedy Airport, and from there he would be flying home to London. New York was a stopover in his journey from his original point of departure – Haiti, a place that, of course, is very much in the news these days. He told me he is a photographer and had donated his services to record some of the relief effort that is in progress on the devastated island.

END_OF_DOCUMENT_TOKEN_TO_BE_REPLACED

Or, in a slightly less obscure way, my top ten favourite cabbie moments from the last 3 years…..

10 – Cab as changing room. Nice young lady hails me on Piccadilly and needs to get to Covent Garden pronto.  Dressed in nice smart business suit carrying briefcase and holdall.  I concentrate on getting her there when all of a sudden I can’t see her in the rear view mirror.  What the?  I then notice that she is lying on the floor of the cab trying to fit herself into some pretty tight jeans.  Concentrate on the road cabbie, concentrate. 2 minutes later we reach her destination, she gives me a decent tip looking very glam and, I’ve just noticed, wearing a completely different top.  When did she do that?  Gutted, a nice old couple hail me and I take them to Victoria.  Did that just happen?

9 – Brighton & back. The most recent of the top 10, this happened on Monday this week.  About 11:30pm, I’d just done one of the most pointless jobs (Grosvenor House Hotel to Cumberland Hotel) of recent times, when I was round the back of Shepards Market thinking about going home.  3 blokes hail me.  “How much to Brighton & back mate?”.  Long pause from me, then short conversation along the lines of  “you mean the town” and “I’ve no idea what to charge” and “it’ll have to be money up front” and “I’ll need some more diesel” and “thanks, £??? will do nicely” (you never know when the Revenue might be listening).  And off we go.  It’s only one of them that needs to go, he is Dutch (I think) and needs to drop some money & documents at his “cousins” then get back to the Hilton Tower Bridge before heading home early Tuesday morning.  We chat, a bit, and 4 hours later I am home considerably better off than I had been at 11pm.  Nice.

END_OF_DOCUMENT_TOKEN_TO_BE_REPLACED 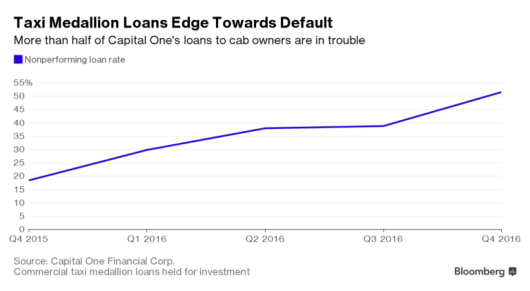 There’s a good reason your cab driver is so cranky: His livelihood might be teetering on the edge of default. According to a recent presentation prepared for Capital One Financial Corp. investors, some 81 percent of its $690 million in loans for taxi medallions are at risk of default.

Medallions, the small metal shields affixed to the hoods of taxi cabs, are issued by the local taxi authority and effectively allow the cabs to operate legally. Owning one used to be akin to owning a gas-guzzling, money-printing machine. Medallions in New York City traded at more than $1 million in 2014, but today’s prices are about half of that.

Now the share of taxi medallion loans Capital One thinks its borrowers won’t be able to repay in full has nearly tripled over the past year, to 51.5 percent. (Another 29 percent of loans are to stressed borrowers who could be in trouble soon.)

END_OF_DOCUMENT_TOKEN_TO_BE_REPLACED 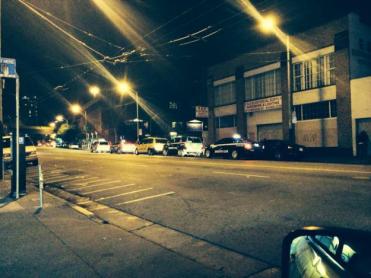 One of the last things she said to me before walking out the door was, “I’m so sick and tired of hearing you talk about taxis and Uber! Uber this! Taxi that! Blah blah blah.”

Now I’m not about to blame, much less give credit to, San Francisco’s transportation problems for ruining my marriage—I’ve done a good job of that myself—but it didn’t help.

At first Irina enjoyed hearing my crazy stories when I got home late. She usually waited up for me and, while she drifted off to sleep, I’d regale her with the details of my rides. But eventually, she got bored. Because, as she pointed out, they were all the same story with only slight variations.

END_OF_DOCUMENT_TOKEN_TO_BE_REPLACED

What Have We Wrought?

Can it be true,
or can it be not,
what we have brought
upon ourselves?
Could it be a divine
old Testament
pestilence
reminding us sins are
counted
and the numbers are in,
God
smiting us like
so many wayward
Egyptians
in a blood-red
sea?
Again
having done what,
what have we
done
to be punished so?

While of course an exaggeration, it does at times seem that we in taxi industry are cursed or under attack from less than benign spirits, given the numbers of obstacles placed in from of us, obstructing from making a simple dollar.  Last week four Yellow cabbies were given citations from the City of Seattle for the crime of not having their for-hire licenses copied, enlarged, then posted in the cab.

That the 10,000 plus Seattle Uber and Lyft drivers, under the same requirement having a current and valid for-hire license are neither stopped nor cited for similar violations says much about what is occurring.  The question is both why are we treated differently and just why does the City of Seattle and King County think we in the taxi industry will continue to accept the unacceptable?  Puzzling it is but certainly not indecipherable.

END_OF_DOCUMENT_TOKEN_TO_BE_REPLACED

“Foul-mouthed, rude, obnoxious, bigoted, argumentative, extreme right-wing, money grabbing thieves . . .” and that’s just the good guys – upset a London taxi driver at your peril you and will become a fully paid up member of the endangered species list.

But are we really like this? No, of course we are not, “we’re all angels, ‘onest guv’nor”.

Don’t take my word for it, take the late Bob Payton, founder of the Chicago Rib Shack; he called us and the police “the only true professionals in Britain”. Whilst we accept his praise, it’s a bit much lumping us with the British bobby, after all, some of them carry guns, and we have to resort to other methods to deal with cyclists (or moving targets as I prefer to think of them).

Are we really the demonic force we are made out to be or are we the victims of a bad press after a newspaper reporter fails to get a cab home?