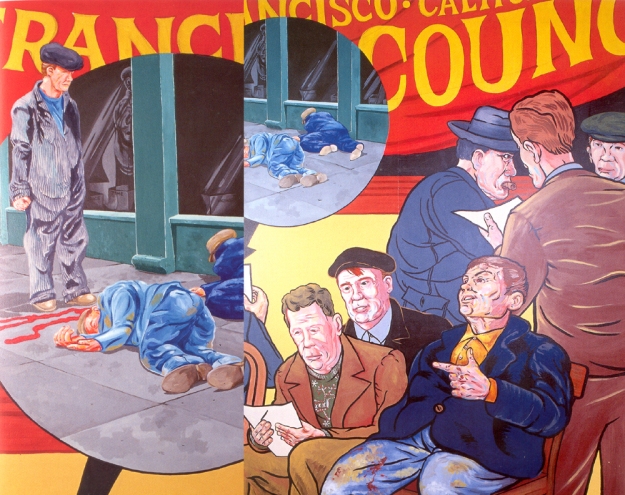 I talked about driving a cab long before I went to taxi school. In zines, blogposts and Facebook comments detailing my experiences as an Uber-Lyft driver, I wrote about a quest for legitimacy. On Twitter, I lambasted the predatory business models of the “sharing” economy and constantly tweeted my ambition to drive a real cab. After a while, it was too late to back down.

I’d read the list of requirements on the SFMTA website several times but going through the intensive process was a daunting task. It’s not easy becoming a cab driver in San Francisco.

Fortunately, Thomas Canne, a DeSoto driver, approached me on Twitter and answered all my stupid questions. Then Mansurel, a former cab driver I’d met at a protest outside Uber headquarters, introduced me to Jacob Black, who guided me the rest of the way to National/Veterans. Since the first step to becoming a cab driver is taxi school, he gave me the number for the Taxi Driver Institute.

I called right away. When I told Ruach Graffis, the director of the Institute, that I had been driving for Uber and Lyft and wanted to go legit, she said, “Don’t worry, I’ll make an honest cab driver out of you.”

I bragged about knowing my way around The City. She gave me a pop quiz on the streets of Noe Valley. I failed miserably.

The following Tuesday, I took BART to the 16th Street Station. The Taxi Driver Institute is on the 3rd floor of the Redstone Building, a historic landmark also known as the Labor Temple. It was in the auditorium of the Labor Temple that San Francisco workers organized the General Strike of 1934.

In the lobby, I marveled at the murals depicting the accomplishments of the labor movement. As I walked through the hallways, I passed offices for local unions, social outreach organizations and publishers.

I couldn’t believe a place like this still exists in San Francisco, where the on-demand economy first took hold. And where companies like Uber, Postmates and TaskRabbit practice free-market capitalism under the guise of “disruption” and push workers’ rights back to the 19th century.

In the Labor Temple, I found the legitimacy I had been looking for.

The Taxi Driver Institute is in a small room filled with thousands of books and what might possibly be an exhaustive collection of taxi memorabilia. The feng shui is organized chaos.

Ruach sat at her cluttered desk in front of a conference table. The first thing she taught us was that “cabbie” is not an appropriate term for a taxi driver. Since the word is gender specific, a female taxi driver would be a “cabette,” which is insulting.

Over the next four days, Omar, the only other student that week, and I huddled together furiously taking notes while Ruach browbeat cab driving into our brains as if we were going into battle and our lives depended on what we learned in the next 28 hours of course work. Her lesson plan included numerous handouts, worksheets, checklists, multicolored hi-lighters, videos, maps and more than one tongue-lashing.

Besides SFMTA taxi regulations and traffic laws, we covered ADA requirements and studied how to navigate the streets efficiently. There was even sensitivity training and instructions on safety and protecting ourselves as workers. In the afternoons, she quizzed us on that day’s material. And each night, we left with homework.

On Friday, we had our final exam. As I walked out of the Labor Temple with my certificate, I felt like I’d accomplished something way more significant than just filling out a form through an app. I passed Ruach’s class! But this was only one step in the process of becoming a cab driver.

The next week, I got fingerprinted, waited in line at the DMV for a copy of my driving record and, finally, attended a daylong class at the SFMTA that included lectures and Powerpoint presentations from San Francisco Paratransit, the SF Bike Coalition and Lighthouse for the Blind.

That afternoon, I left the SFMTA building a bona fide San Francisco taxi driver. Before I got on BART to head home to Oakland, I tweeted a picture of my temporary A-Card. Of course.

Reprinted with permission from I Drive S.F.