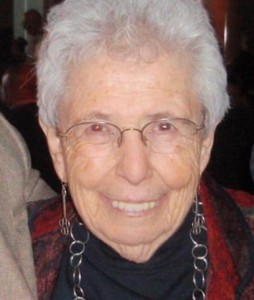 Kathy Goldman is a New York native, born in the Bronx in the 1930s and currently residing in Manhattan, who has dedicated her life to community activism and issues of hunger, food, and poverty. Her advocacy has focused on reforming food programs in New York City schools, as well as promoting the passage of federal food welfare programs. She founded the Community Food Resource Center which now exists as a part of the Food Bank for New York City, of which she serves as a board member. In addition to all her work relating to hunger, Kathy has helped to begin and manage several senior programs and centers throughout her life. However, she describes her accomplishments as a member of the organization United Bronx Parents as her biggest and most influential.

It all started in the Bronx. So much starts in the Bronx – hell, I started in the Bronx! I am the daughter of Jewish immigrants. My father was a Polish carpenter and my mother a Hungarian writer and stay at home parent. We lived in the South Bronx in the 1930s and 40s, back when it was a hub and home for immigrants. It was a time when people lived in neighborhoods that they gave a damn about, with people that they gave a damn about. Both my mother and father were big influences and activists in our community. She started a Hungarian-American women’s magazine that many of her friends contributed to and read while he worked as the secretary treasurer in one of the carpenters’ unions that existed at the time. I know I didn’t think about it much then, but they each very much instilled in me a sense of loyalty to the groups I was and have become a part of. They taught me that compassion and hard work could make change happen.

I truly did not get involved in activism myself until much later in my life. It was the 1960s, around the time that I was living and working in the Bronx with a few of my own kids going to school in the area, when I began to get involved in the work that has defined a lot of my life since then. I was invited to join the United Bronx Parents when it was started in 1965 by Evelina Antonetty. She was a wonderful and smart woman who, one day, was told about a five-year-old that had been suspended from a school in the Bronx and was immediately outraged. She started UBP to reform and change the schools in the Bronx for the better of the children and community members. It was an amazing group that did amazing things for the quality and integration of schools in the Bronx. I believe it still exists today, but I doubt it’s the same.

Back then we did what no one else would even consider doing. At one point, we were actually able to get the test scores and the budgets for the nearby schools and we published them in any newspaper that would take them. People were furious. It was one of the first times that so many parents and students were able to see that they had done nothing wrong. They were victims of a system that hurt them. The differences in the results and costs of the mostly white schools versus those that were entirely Puerto Rican and black was huge. That was what started to get us recognized. They still print those scores today, in fact. It’s really true that when the people get mad, they bring the change.

A few years into UBP a group of about a dozen Puerto Rican women came to see Evelina and I. They wanted to talk about the lunches that their children were getting from school. I had never thought much about school food before I spoke to those mothers. In my house, my children would come home for lunch and eat whatever was left over or I’d give them a dollar to grab something for themselves. But these women and their families depended on the lunches served at the schools. They spoke to us about the food that was being given out. Unsafe, unhealthy, horrible food! And that is what we decided to focus on first. UBP wanted better food (and free food, at that) for the schools in the Bronx.

We really were so bad back then. To get the Department of Education’s elected officials to even consider listening to our argument we decided to invite them to a lunch to discuss the problem. When they all showed up that afternoon, we loaded them onto a school bus and took them out to eat, to their dismay, at one of the schools they claimed had completely acceptable food. It was hilarious. One of them actually ended up getting sick from whatever he ate. Needless to say, the food, to some extent, started to get better and cheaper. Breakfasts and some after-school snacks and meals were also introduced in many places.

From that point on I was hooked. I have worked primarily on issues of food and hunger, especially in the schools throughout New York City, since then. My biggest accomplishment was probably the Summer Meals Program that we pulled off in UBP. Those women, the same who came to us with their need for better school lunches to be provided to their kids, spoke with us about the struggle they faced each summer when school ended and the family was faced with making up for the meal that the children would usually receive there. So UBP did what we did best and appealed to the Board of Education, who, predictably, told us that they weren’t giving us anything but that we were allowed to run a program ourselves. Which is exactly what we did. We rented out a space and talked with local grocers and restaurants. Somehow, we managed to create and run a Summer Meals Program out of nothing, with the help of the neighborhood. Now the same kinds of programs exist across the city.

It was always those accomplishments that felt the best. The times when the community rallied together and did what the government wouldn’t. I still struggle, though, with the kind of work that groups like ours do. It is good work, necessary work, because it needs to get done each day to keep people alive and well. However, it is the government’s responsibility and it falls on individuals to right the injustices that they are faced with. Finding a balance between doing what must get done for the group’s survival and demanding that the government do its job is the hard part. UBP taught me a lot about this balance and I carry that knowledge still and have throughout all of my work with hunger and poverty issues even after I left. It’s the same knowledge that my parents understood – that people can make change happen. The key is to jump on the government’s mistakes. Point them out and do not let them stand, because change is possible it just takes small steps and willing advocates.

This interview was part of a series on unheard voices by Fordham students in Prof. Chris Rhomberg 2018 Urban Poverty class on behalf of Labor Arts and the National Writers United Service Organization. More at Laborarts.org.