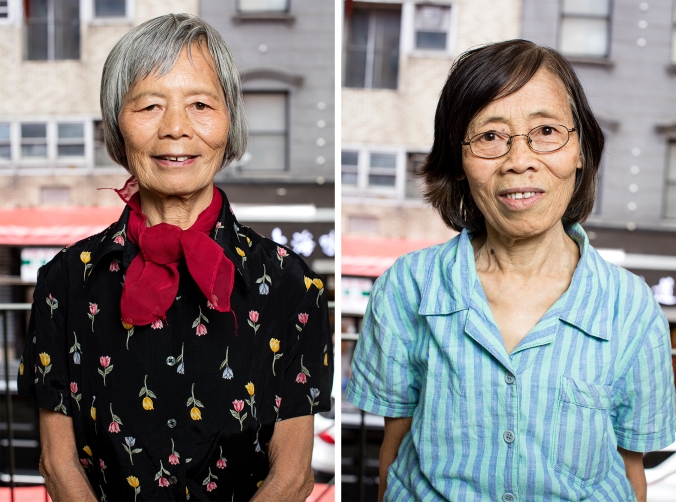 We were born in Vietnam. Our family was from China, but our parents had businesses in Vietnam. We were a very big family of ten children; six girls and four boys. Our mother took us back to China to be raised by our Grandma. After she died, an elder sister took care of us. After a few years in Guangdong, we moved to Hong Kong…3 sisters and an older brother. Bonny (Ng Mui) was about 12-13 years old. Our parents were still in Vietnam, and Mother only came back once a year. She brought gifts and special foods. We were very obedient, took care of ourselves at home, and did a lot of different handicrafts work… embroidery, knitting, making wigs. We didn’t run around outside. Later, Bonny worked for a tailor and did trimming and belts, often taking work to do at home. Cindy worked at making wigs.

After the Vietnam War ended in 1975, our parents were able to immigrate to America, and we followed in 1976. When we got to America, we were glad to find jobs in the sewing factories. We had to learn how to sew, how to use the machines. The co-workers were very friendly about teaching us, and telling us how to join the union. Factory work was good for us, Since we did not know English. Cindy worked in six different factories, starting with ladies’ suits, then coats and evening dresses. Everyone helped each other to get and share information at work. Bonny worked at three different places over twenty-nine years, making pants, skirts and vests. There were health benefits, paid holidays, and the union offered many activities. We took English classes and joined the union’s chorus. We also supported lots of marches and rallies for the garment industry. The boss let us leave work a little early for union meetings.

Bonny did volunteer work for NY Downtown Hospital helping people in Chinatown with health check-ups, mammograms, etc. We also used our old handicraft skills to make quilts and banners for the community and union. Cindy got a part-time job making men’s wigs for a short time. The men’s wigs were different from the Women’s wigs she did in Hong Kong… they were toupees that stick to the head. Eventually the wig business moved, so her job ended.

Children need to be taught to help each other and respect their elders. Parents and children need to learn patience. We know co-workers who were punished with jail time for beating their kids. It’s better to talk about problems and resolve them. There was one parent who took his child to a strange place and left them there alone to find help and get home. Later, this kid grew up to become a police officer!