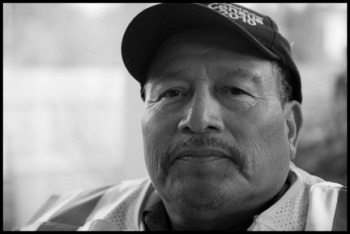 I came here the first time in 1985 and went to work at in a vineyard. I didn’t know how to do the work at first, but I eventually learned how to prune, plant, tie vines and remove leaves. I also worked the grape harvest. I already had experience working outdoors on many ranches and in the fields in Oaxaca. It was easier working back there, though.

After a couple of years I brought my son Alejandro to the U.S. He began to work with us, but then cut his hand. The contractor said, “He can’t work. He has to go to school.” I didn’t know anything about the school system, but a friend helped me enroll him in high school. Alejandro graduated and went on to attend college in Sacramento. Two of my sons later joined me and then I brought my family to the U.S. in 1999. My wife, daughter and grandchildren all came.

I work in the fields to help my family. I worked a few years at one winery and then changed companies. It was very hard working for the second winery because they pressured us to work extremely fast, and they did not even provide us with water. You had to be strong, but some people couldn’t handle the conditions. The soil was hard; to do some jobs you had to walk with a shovel and a sack of fertilizer. People used to faint during the harvest because the work was so difficult. If you were behind the others by 20 plants, there was no work for you the next day.

Thank God, I held on and managed to work seven years there. Thank God the union came in and because of the union they paid better. Most companies were paying $5 or $5.75 an hour, but after the union came, we got paid $7.45 for pruning and tying. Pruning on machines paid $8 an hour. There were a lot of marches and strikes when the union was trying to organize, but when it came it helped people a lot. There were bathrooms close by and people worked at a more relaxed pace. We were given more rest breaks. The union is very important for poor people. We didn’t know where go to ask for help and I barely spoke Spanish.

Farm worker wages are barely enough to get by. Everything was less expensive when I first got here. Now the wages are barely enough to cover rent, insurance, food, electricity and garbage. The wages are not enough to pay for everything, but what am I going to do? They’re just enough to get by. Working in the fields is very hard. Depending on what you’re harvesting, whether it’s apples, pears or grapes, it can get very hot or very cold. There are days when you eat, and others when you don’t, but you always have to work.

Back in 1986, I completed the paperwork and became a permanent resident. My wife is also a legal resident and two of my sons are U.S. citizens. Thank God we were able to settle in here. We now have a home and live very well with our family together. I don’t have any problems with the law and live in peace.

It is such a joy to celebrate and spend time with my family because I love them all so much. My family speaks English, and they have established lives and careers here. Another son will soon follow Alejandro to college, and it gives me great joy that they have an education and are well situated. 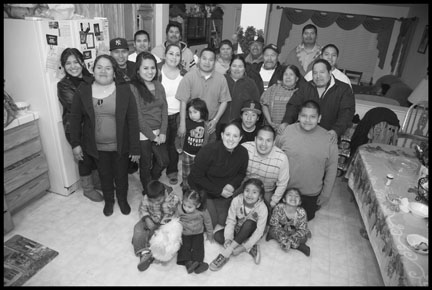 Pedro and his family