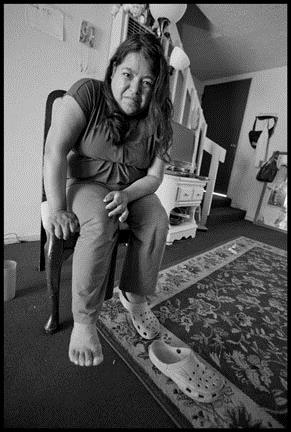 SANTA MARIA, CA – Teresa Mondar is a farm worker from Oaxaca, who began working in the fields of north Mexico when she was eight. Today she is disabled by arthritis and lives in an apartment with her family in a poor neighborhood of Santa Maria, CA.
Copyright David Bacon

I’ve worked many years in the fields here in the United States. Many years. I left Oaxaca when I was four years old. I don’t remember my time there. We moved to Baja California and I began to work there when I was eight years old, picking tomatoes. We came to the United States after that. My memories of that time are very sad because I had to work out of necessity. I started working in the United States at fourteen in California and in Washington State. My mother couldn’t support my younger siblings alone, and I’m the eldest daughter. I couldn’t go to school because my mother had younger children to support.

I started in the fields with strawberries and squash and weeding the fields. My very first job was picking strawberries. The foremen asked how old I was, but I lied about my age because I needed to work. I covered my face while working so they wouldn’t see my true age. We just worked there for the first five years, and then we went to Washington to pick strawberries, cucumbers and blueberries. We’d only go for a short time — two to three months — and then return to California.

When we were in Washington, the owner provided us a place to live. It was a house in the middle of the fields. We shared it with two, three and sometimes four families, about fifteen to twenty people in a two-bedroom house. I was just a young woman and it felt very bad, but we did it out of need. We suffered a lot. We had no privacy — none of that. We would sleep ten to a room. We slept on the floor — we didn’t have beds.

The conditions in the fields in those years were very bad too. They paid us very little. It just wasn’t enough. Each family received a check for an average of $600, which was for five or six people, so each person averaged about $100. It wasn’t a legal wage. We had to accept what they gave us, even though it was only enough to cover food. It wasn’t even enough to cover the rent.

Back then there wasn’t a lot of work in California. The strawberry crop would finish up and we had to find work elsewhere. There wasn’t enough work here during the off-season to pay the rent and food. The harvest lasted five to six months, so we then went to Washington for two or three months and then came back. We went in order to have enough money for food.

While we were in Washington we weren’t earning enough money to pay for rent in California at the same time. Finding housing when we returned was difficult because deposits run around $1,500. We would lose a lot of money.

Eventually in the California strawberry crop, I was making $200 to $300 weekly. Sometimes the foremen would treat us OK, but not always. They’d tell us to work faster or we would be fired. Some yelled at me and made me cry. I felt very bad, because they’d yell, “Hurry up little girl or you’re going to get fired.” Those are horrible words. The owners were at fault, though, because they wouldn’t train their foremen about how to treat the workers. Many foremen were very rude. Another experience I had is that owners would pay us with a check that doesn’t have funds. I still have those checks. I’d go to cash my check and they’d tell me that the account had been closed for a number of days already. That happened to me three times.

Working this way, at first I felt fine because I was young, but after doing it for five years, everything changed. My body couldn’t handle it anymore. It got more difficult as time went by, because picking strawberries is very painful on your hands and feet. I kept going because I had to work for my family. I kept working, but then I was diagnosed with arthritis when I was just twenty-two years old. Arthritis is usually something the elderly suffer from — that’s my understanding. My doctor told me that. He told me I didn’t take care of my body while working in the fields. When we picked strawberries the rows were flooded with water and our feet would get wet to our ankles.

I have arthritis in my hands and feet. I have a lot of pain and can’t work. I’m thirty-two years old and can no longer work. I try, but I just can’t. I also have pain in my back. The money I earned working in the fields, I had to use to visit the doctor. I spent a lot of money on medical care, yet my health hasn’t improved.

The doctor told me to find an easier job and I tried, but the pain was getting worse. I looked and looked and found an easier job, but then I couldn’t move my finger. I had to stop working completely. Still, I did find foremen that would give me work during that time. I would explain my health dilemma to them. The easier jobs were picking blueberries or weeding fields, but I realized that even those jobs weren’t very easy.

There isn’t an easy job in the fields — I realize that now.

I’ve gone back to the doctor multiple times because I can’t stand the pain. I tried working two to three days a week, but my body failed me. I can’t even do household chores anymore. I feel so sad because you have to take care of your body. The pain comes years later, and then you can’t stand it.

Imagining my own future is hard, because of what I’ve been through. I see a future here in the United States, even with my health issues. I want to move forward and hopefully start a business in a job that isn’t so hard on my body, but something steady.

It has been hard, but my brothers and sisters are grown and doing well. I’m proud of them. I’m proud of my family, and that I’ve helped us survive.