My first job was at Chick Fil-A when I turned 16.  From there, I worked retail at Belk and Shoe Carnival, and had a stint at an Outlet Mall.  I have waited tables and bartended at Chili’s, Applebee’s, Shoney’s, IHOP and more, and worked sales at a wholesale and retail warehouse.  I’ve managed customers for a landscaping company and handled patients at a chiropractic practice.  At this moment, I work for a massive drug development company in a position that requires absolutely no customer service work, and I love it more than words can express.

I’m grateful to currently be in a position where I don’t have to worry about the whole “customer is always right” philosophy.  If someone screws up, I tell them to fix it.  If someone is rude to me, I don’t have to put up with it.  When I’m put in front of a client, I’m not the one who has to answer to them, so it’s not a stressful environment with me feeling like I have to pop my customer service voice on and play nice.  There’s a mutual respect rather than one or both of us feeling an obligation to fake it.

Just because I’m out of the field doesn’t mean I’ve forgotten what it feels like to have to slap on a smile only to have some customer tell me it’s not good enough.  Or yelled at because of a store policy I have no control over, a long cook time on a Friday night, the temperature being too hot/cold, the credit card declining, or one of countless other complaints.  Or touched without invitation or permission.  Or told I should be fired over something that has nothing to do with me.  The customer is “always right” and they know it. 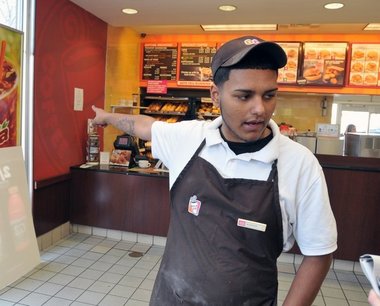 I don’t understand why customers feel that they have ownership over those in the service field.  Yes, they are here to help you.  No, they are not your slaves.  It’s unbelievable to see people take the “I’m always right because I’m a paying customer” idea to the extreme, at the expense of whatever poor hourly employee happens to be standing in front of them.  On the tame end, you have people who refuse to say please, snapping their fingers to get an employee’s attention and refusing to make eye contact or speak to them like they would an equal.  On the other side of the spectrum, it’s terrifying.

I’ve had people try to hand me dirty diapers and sanitary products (excuse being that the receptacle in the women’s room was full. Gross).  I had a kid piss everywhere inside a store and the mother look at me, say “she can clean it up,” and walk away.  I’ve had things thrown at me.  I’ve been called all sorts of names.  I dealt with a customer who would tip his server $100 in order to get extra “services” later.  I’ve been cussed at because I didn’t give a customer my phone number.  I’ve had customers demand I be fired on the spot for following store policy.  I’ve been stiffed on tips after running my ass off for people.  I’ve been called racial slurs, a slut, and an idiot.  I once had someone try to follow me home.  And my experiences aren’t even the worst of what happens.

Your cashier at Target is a person, not a punching bag.  But once someone becomes the customer, the employee turns into a being that is less than human, one made to absorb a verbal beating (and sometimes a physical one) and smile as they take it.  It is the most illogical thing, but people do it consistently and do it with confidence.  The customer brain directs a person to think they have a right and an obligation to treat service workers as rodents.  Less than rodents.  Like rodent shit.

I don’t give a damn if the lady at the drive-thru doesn’t smile so widely at you, you can see every one of her teeth.  Leave her be.  I don’t care if you disagree with store policy, it’s not the doing of your cashier so shut up about it.  Quit trying to scam your way into free meals or store credit with your whining and bullshit.  Stop making the life of retail and food service so incredibly difficult for the people busting tail to make your experience a good one.  Just because someone’s job is to serve you doesn’t mean that your job becomes being a right twat, hell bent on making their life miserable.  Retail and food service isn’t as easy as most people think; dealing with assholes all day takes its toll.  Be the one person who decides to keep their trashy attitude to themselves and don’t follow the entitled herd.  Retail people are people too.  Don’t forget that.

Reprinted with permission from The Sanity of a Mad Woman.