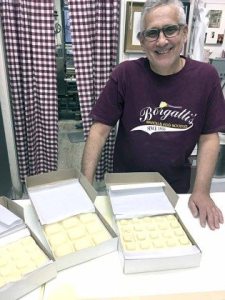 By Lizeth Brosnan and Jenna LoFaro

Chris Borgatti is the current owner of Borgatti’s Ravioli and Egg Noodles on 187th street just off of Arthur Avenue in the Bronx. Chris is the third generation to take ownership of this family run business.

He has worked in the store since he was a young boy with his father, Mario along with other family members. He says that working in the Borgatti store, at least for a short time, has become a rite of passage in his family. His own son worked in the store as a boy and now attends Fordham University’s continuing studies program after having graduated from the Gabelli School of Business.

Chris recounted some of the history of his beloved shop. He said that his grandparents opened the shop after immigrating to the Bronx from Italy, 81 years ago. At that time, the store was about half the size of what it is today.

He also spoke about the progression of their ravioli sales. Saying that originally, his grandparents would mass produce hundreds of tiny raviolis and sell them at a price of one dollar for every hundred.

Today, Chris still uses the same recipes as his grandparents did when the opened the shop in 1935. He notes that the demand and customer base for his family’s product is still very much alive and growing, something of which he is very proud.

Like many New Yorkers, he feels great connection to the neighborhood and city he grew up in. He is both happy and proud to be carrying on his family’s legacy in that very neighborhood today and to be continue providing the community with a high quality product.