Maria: My Reflection in the Mirror
By Mona Lunot Kuker

You’ll see their faces in the subway train, in shopping districts, in grocery stores, inside the bus, or in the park. I hear them talking in my native tongue (Tagalog), and every time I see them, I feel as if I am looking at my own reflection in the mirror.

Domestic workers are often women who leave the Philippines to pursue dreams for their family by working in the United States, Europe, or the Middle East. We work as nannies, cleaning ladies and caregivers around New York and across the globe.  These are jobs that are possible to hold without regard to immigration status; there is little enforcement of such arrangements, and fear among workers that they can be deported.  Each of us has an interesting story to tell—usually a  story that most likely, we would rather keep from our families and friends, not for reasons of pride, but because we don’t want our loved ones to worry.

We usually want to impress those at home with news of a better life abroad. After all, this was the reason why we left the country in the first place.  But there are trade-offs for many of us.

The balikbayan box, or package of goodies delivered door to door, that we fill and dollars that we send to our families are simple joys to shake off our sadness. The backbreaking work is better than having loved ones suffering from chronic want. It is better to face discrimination in our new country than fail to provide children with a college degree. We are better off even suffering isolation than seeing children suffer from unimaginable poverty.

We left because poverty in the Philippines for us was like a bubonic plague that could cause death and stunt growth of the majority of the people. We also experienced government incompetence and corruption that made things worse for ordinary people.  Thus, to many Filipina women like me, the solution was – and continues to be – to migrate. That decision has launched our interesting journeys oftentimes sad and perilous.
* * *
Meet Maria (not her true name), who is one of the many persons whose life I have witnessed. Her experience made me think and touched my heart, perhaps explaining why many Filipinas feel they must suffer in exchange of a better life for family.  To make her eligible for emigration, a relative who worked as a Philippine diplomat to Canada agreed to sponsor her. For a couple of years, she worked as the all around domestic worker, then crossed the U.S. border to Ohio, to work for the ambassador’s daughter.  A high school graduate, she was in her early 40’s when she left the Philippines.

In 2005, a close friend of mine from the Philippines told me about Maria, adding that she was overworked and isolated.  Maria wanted to move to New York, my friend said, and she wanted help finding a better job and  a  new start. Actually, Maria’s family was distantly related to me, although I could not remember if I ever had met Maria. Nevertheless, I did not hesitate to help because we shared the same experience of being exploited.

My friend gave her my phone number.  I found myself talking to an extremely stressed out woman who worked for grueling seven days a week, on duty for up to 20 hours a day. She barely slept. She said she was an all-around domestic worker, a nanny to one child and a caregiver to a bedridden elderly woman. She had to clean two cars and cook the family’s meals outside the house during winter because her employer wants to avoid food odors inside.

I heard her shivering while cooking in the cold and talking to me on the phone. For almost two years, all I did was listen to her agonies and I gave her advice as her peer.

I suggested that she should leave, if she felt that work had been too much. She started complaining about her sore arm from assisting the 200-pound, bedridden grandmother. Her salary was $600 a month, clearly less than minimum wage, and tiny when considering all the chores that she did in the house and her long hours. It felt as if she were imprisoned as a slave; as she told it, to leave would be as if she were escaping from prison.

She said she was terrified about complaining because the family was powerful. Her employers were well-known as a very religious couple. They worked as doctors in the community, and no one would believe her story of abuse.

Feeling depressed, Maria wanted to go back to the Philippines. I encouraged her to come to New York where she could stay with me in my small room until she found a job.  But I thought it was impossible.  I can tell from the way she talked to me that she was both naive and petrified. Any person who suffers abuse for a long time loses self-confidence and sense of direction.

Upon my suggestion during our long conversations over the phone, Maria befriended the two caregivers of the grandmother from the Home Health for the Elderly. They and another friend who knew she felt abused were her only contacts in Ohio. I advised Maria to tell the two health workers of her bad situation and ask for help to escape. Maria said she did not know even how to get a cab, nevermind a bus ticket.

For two months, Maria remained silent, working with the local friends. They gave her a one-way ticket to New York City on a Greyhound bus, money for a cab and instructions on how to get to the bus going to New York. The two health workers asked if she wanted to file charges against her employers but Maria refused because they were relatives and she did not want any scandal. Indeed, the day before she left, someone from the health group called me, asking me questions to determine that Maria would be safe with me.

At the local bus station in Ohio, a police officer stayed with her until the bus left.  Maria told me she was so scared. She carried a small luggage and shoulder bag and wore pajamas and sandals when I met her on Lexington Avenue. When I saw Maria I wanted to hug her. She looked exhausted. She told me she could no longer take the abuse, so she had escaped.

I shared my room with her and asked my friends to help her find a job.

I was impressed at how the Filipino community responded positively when they learned about her ordeal. Maybe it was because many of us we can all relate to her experience. Everyone advised her to be optimistic.  We have to be intrepid to make everything fall into place, even that means starting again from scratch.

Maria is finally free, although her diplomatic visa has expired, and she is off-status or undocumented. But that’s another story. The most important thing is she was able to free herself from the bondage of servitude and abuse.

Maria’s initial plan was to go back home because of fear that the ambassador might have her deported. But I advised her instead look for a job in New York. I asked her to be patient. Finding a job took a month. First there was a part-time situation, then a full-time job for a wealthy, .kind-hearted family where she remains working as a babysitter.

There are many Marias out there who are working for powerful elite families and are being treated as slaves. It takes courage for the abused domestic workers to get out of their conditions. They also need all the help they can get. I often ask where is the justice for abused workers?

A research study in 2012 by the New York-based Domestic Workers United (DWU) said that live-in domestic workers are twice more likely to get abused than those who live outside the work home.  These live-in workers are frequently expected to work longer hours. Most of them suffer economic, mental, emotional, and even physical abuse.

The DWU study further noted that 23% of workers surveyed are paid less than the minimum wage and that 48% of workers earn a wage below the level needed to adequately support a family.  The study surveyed 2,086 domestic workers coming from 71 countries and now living in the metropolitan areas of New York.

It said that 10% of workers are victims of wage theft, including not receiving any wages at all, 23% reported being paid late, compounding the high burdens of low-wage work.  The study said that 25% of live-in workers had work responsibilities that prevented them from getting at least five hours of uninterrupted sleep at night in the week before being surveyed.

Eighty-five percent of the respondents of the study are undocumented immigrants who work in substandard conditions. In general, they do not complain because they fear that their immigration status will be used against them.

Domestic workers often endure verbal, psychological, and physical abuse on the job, and, because of the vulnerabilities they face, rarely have effective recourse. Those who are hired directly by their employers have severely limited employment rights and can find no remedy in federal law for employment discrimination, unsafe working conditions or constraints on their right to organize and bargain collectively.

The DWU, founded in 2008, said that domestic work is important in the society, because many jobs will not be possible to many without domestic workers who provide care in the home setting, taking care of children and the old members of society.

In 2010, domestics in New York won a historic victory with the passage of the nation’s first Domestic Workers Bill of Rights, setting minimum standards in the domestic work industry. Pushed forward by the DWU, the law guarantees privately employed nannies, housekeepers, and elder caregivers with at least a day of rest per week, at least three days of rest per year after the first year of employment, overtime at the regular rate of pay for live-in workers, sets a day’s work at 8 hours, minimum wage coverage for companions of the sick and elderly, and protection from discrimination and harassment.

DWU currently works with the Department of Labor in the city and has engaged in outreach, education and enforcement around these basic rights and protections. 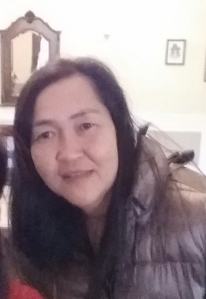 Mona Lunot Kuker is a baby-sitter and artist in New York. She has recently decided to write essays and journalistic pieces and produced this essay as a part of the Aspiring Writers Mentoring Program under direction of the National Writers United Service Organization. The two paintings are Mona’s as well.

One thought on “A Look at Domestic Slavery”