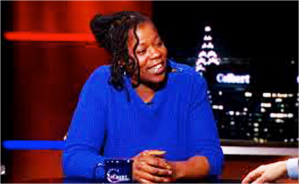 NEW YORK CITY – The assignment coming together on the table at a mid-Manhattan coffee shop suddenly seemed all encompassing for three fast-food workers. They were collaborating, sharing ideas and rejecting others, for a one-page graphic story that at once would relate the plight of the under-paid and shine optimism and hope for their superhero, “The Unionizer,” in helping workers to demand better wages and working conditions.

Naquasia LeGrand is 22, and was working two KFC jobs until one KFC closed, limiting her to 15 hours of work a week; her hours there are not fixed, so another job is difficult.

Even at $8 an hour now in New York it is difficult to make ends meet at her grandmother’s apartment, where she lives. She had just told her story on the (Stephen) Colbert Report. What she knew for sure, she said, was that a multi-billion-dollar corporation made enough to offer living wages for her co-workers.

Anthony Roman, 39, who supports a parent from work at three McDonalds, often closing them at night, and must find available time to visit his older brother in jail, just learned that his girlfriend, a nurse, is having triplets.

Maurice Royal, in his 30s, who was laboring now on the illustrations, has been working jobs at two Burger Kings, nevertheless lives in a men’s shelter on the Bowery. Five others there are fast food workers.

They are fast food workers as adults, not teen-agers, as those opposing increases in minimum wage contend.

Indeed, there are an estimated 50,000 fast food workers in New York City alone at hundreds of outlets.

Average age is above 28, with disproportionately high number of minorities and women. Minimum wage in most states outside New York, is $7.40. Federal minimum wages are $7.25 an hour.

These workers must supply their own health insurance, uniforms, transportation, and generally are held to under 30 hours a week.

Arguments over minimum wage belie studies showing that with more than half of fast food workers getting some form of public aid; a logical conclusion is that taxpayers are underwriting fast food corporations to pay low wages.

Today, it was a different kind of work, a team effort among themselves, along with coaches from a nonprofit called Workers Write, and a chance to think about how to make their labors into an understandable one-page story for those who might happen by a street protest.

The three have found that organizing their myriad thoughts and suggestions for their minimum-wage workplace is helping them better explain their efforts and prove persuasive in winning support from fellow workers, some sympathetic managers and the public.

Groups, including the National Writers Union and the AFL-CIO Workforce Development Institute lend support to teaching storytelling skills,in part to help provide a face and a story behind what otherwise becomes a more depersonalized Left-Right debate over political will and income inequality issues. Each side brings economist arguments to the fore rather than those actually being affected.

It is different from writing exercises they had in school, the three readily agree, and they see discipline is needed to reduce what they want to say to a legend in a graphic illustration.

Indeed, they think that they are developing enough stories to fill a comic-book-sized volume about what they see in their workplace and how issues that strip dignity and respect can be turned around.

As for the storytelling, Maurice said it is now easy to imagine that these are new skills that he can bring to any circumstances he faces.

Terry Schwadron is longtime writer and editor for The New York Times, The Los Angeles Times and The Providence Journal. He left The Times as a senior editor to a variety of writing and music projects, including work as a coach for low-wage workers to tell their stories.