WASHINGTON — As Huffington Post reported on Monday, many workers at Jimmy John’s sandwich shops have been asked to sign the sort of strict noncompete agreement usually reserved for high-level executives. According to the clause, the worker agrees not to take a job at a competing sandwich shop for a period of two years following employment at Jimmy John’s.

The company’s definition of “competitor” is rather broad: any business that derives 10 percent or more of its revenue from the sale of sandwiches, and that resides within 3 miles of a Jimmy John’s location.

After HuffPost posted a copy of the agreement, many readers wondered just how badly such a contract could restrict workers’ job options in the unlikely situation it were actually enforced. Thanks to Sean Maday, founder of the news mapping site SigActs, we now have an answer to what he calls “an interesting geospatial question.”

Using the addresses of Jimmy John’s roughly 2,000 locations, Maday created a map that reveals the effective blackout areas under the restaurant chain’s noncompete clause. The red circles indicate zones in which a worker who signed the agreement would technically be forbidden to pursue sandwich-related work:

As the map shows, if a franchisee were to enforce the clause — and if a judge were to uphold it in the case of a challenge — a former Jimmy John’s employee could effectively be run out of Chicago, Minneapolis and Denver for the purposes of deli employment. Large swaths of other major metropolitan areas would also be off-limits, and former Jimmy John’s workers would have to head to the fringes of the nation’s college towns if they still wanted to make hoagies.

According to one franchisee, the clause is included in the standard-issue hiring packet distributed by Jimmy John’s corporate offices, although individual store owners decide who must sign it. The franchisee said many owners have jettisoned the language from the hiring packet since it came under scrutiny.

HuffPost still knows of no cases in which a franchisee tried to enforce the clause, which many judges would likely find unreasonable anyway. Several low-level employees, however, did confirm that they were required to sign the noncompete as a condition of employment. Use of the clause has apparently varied from store to store; in some, only management-level employees have been asked to sign.

END_OF_DOCUMENT_TOKEN_TO_BE_REPLACED

The latest sign that the tide is turning in favor of better pay for low-wage workers: Walmart’s CEO on Wednesday announced the company’s intention eventually to abandon the minimum wage.

Walmart chief executive Douglas McMillon told reporters after an investor conference that the company plans to pay all of its workers at a rate higher than the federal minimum of $7.25 per hour. He did not say how much more.

Walmart spokeswoman Brooke Buchanan on Thursday confirmed McMillon’s statement to HuffPost, and said that only 6,000 of the company’s 1.3 million U.S. employees currently make the minimum wage. Buchanan said she couldn’t offer a timeline for when the company would make the change.

McMillon is the latest executive whose comments reflect an apparent trend in corporate America to shift slowly away from the current federal minimum wage. The CEOs of Subway, Dairy Queen and McDonald’s have recently spoken out in favor of a higher federal minimum wage. Ikea increased its lowest pay tier for U.S. workers, bringing a raise to more than 13,000 employees. Overall, surveys have found that a majority of employers think the minimum wage should be higher than it is.

Such an intention is particularly notable coming from the CEO of Walmart, which is the country’s largest private employer, and one that is often accused of paying its workers low wages.

Walmart has disputed such claims, saying its average hourly pay is $12.92, which is significantly higher than the federal minimum. That calculation, however, does not include the wages of its part-time workers.

The announcement came as hundreds of Walmart workers and other low-wage retail and fast-food employees protested on Wednesday and Thursday in four cities, demanding full-time jobs and a minimum wage of $15 an hour.

In New York, protesters picketed the Park Avenue apartment of Walmart heiress Alice Walton, where protesters said they would deliver a petition asking for livable wages.

The battle for a higher guaranteed wage has been fought not just on the street but also in Congress. President Barack Obama has called for raising the minimum wage from $7.25 to $10.10 per hour, but his efforts have met staunch resistance from Republicans.

The minimum wage hasn’t been raised since July 2009, and its purchasing power has fallen dramatically since it peaked in 1968. According to the National Employment Law Project, if the minimum wage had kept pace with inflation, today it would be $10.90 an hour.

END_OF_DOCUMENT_TOKEN_TO_BE_REPLACED

Dave Jamieson  dave.jamieson@huffingtonpost.com
10/07/2014
WASHINGTON — The Labor Department announced Tuesday that it plans to delay its enforcement of new minimum wage and overtime protections for the country’s home care workers, though the protections will go into effect as planned.

Workers who tend to the elderly and people with disabilities in their homes had been carved out of the labor protections that cover other hourly workers in the U.S. After a years-long campaign by worker advocates, the White House announced last year that it would extend those rights to roughly 2 million home care workers as part of the president’s economic agenda for low- and middle-income earners.

But pushback against the new rules came from home care companies as well as several state Medicaid programs, which pay the salaries of many home care workers. The National Association of Medicaid Directors recently asked the White House to wait an extra year and a half before rolling out the rule, which was slated to go into effect Jan. 1, 2015, saying its members weren’t yet ready to comply with the new rules.

The decision appears to be a compromise. By delaying enforcement, the Labor Department gives states and companies more time to adjust to the new rules, while also placating groups that were concerned the rules themselves might be in jeopardy.

We have consistently emphasized the importance of implementing the rule in a manner that both protects consumers and expands wage protections for direct care workers. We believe this non-enforcement policy will help achieve both of those goals.

PHI, an advocacy group for home care workers, said in a statement that the decision means workers “will have to wait as long as another 12 months to receive even the most basic labor protections, guarantees that most other American workers take for granted.”

The Service Employees International Union, which represents an increasing number of home care workers around the country, said that despite the enforcement delay, it was pleased the rules were moving forward. Mary Kay Henry, the union’s president, said SEIU plans to work with state leaders on implementing the rules during the months the Labor Department declines to enforce them.

Sen. Tom Harkin (D-Iowa), said in a statement that he “applaud[ed] the Department of Labor’s efforts to move forward with this critical rule. Both caregivers and the consumers they care for will benefit” from the policy.

The reforms will bring home care workers under the umbrella of the Fair Labor Standards Act, the Depression-era law that created a minimum wage and time-and-a-half pay for overtime. Home care workers, who generally earn low wages, have been excluded from those regulations under the so-called “companionship exemption” created by Congress in the 1970’s. Advocates argue that the original exemption was meant to cover casual babysitters but not health care workers.

Some disability rights groups have raised concerns that the reforms raise the cost of home care without increasing funding for it. The advocacy group Adapt criticized the delay in enforcement on Tuesday as insufficient.

“The basic problem with the [overtime] changes is that without funding in place to pay for them, states and provider agencies will simply cap the hours attendants can work to avoid any overtime costs and liability,” the group said in a statement. “This will undercut the ability of people with disabilities and seniors to live in the community.”

END_OF_DOCUMENT_TOKEN_TO_BE_REPLACED

This message is being distributed on behalf of NY Attorney General Eric Schneiderman featuring Patricio, a car wash worker, who benefited from legal help to regain more than $18 million in wage theft cases.

As a car wash worker, I work hard to support my three children. But when my employer wouldn’t pay me my full wages and tips, it became nearly impossible to make ends meet. See:  www.ericschneiderman.com/toughfights 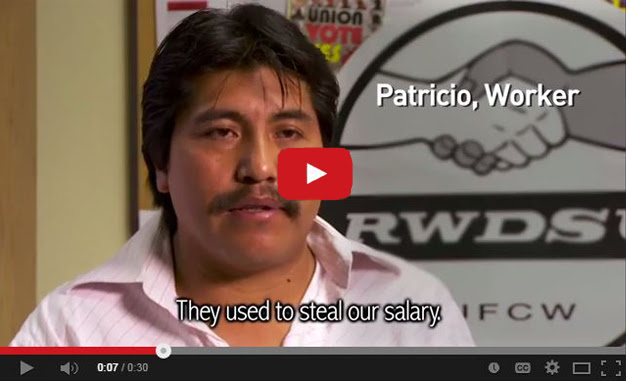 Ikea is acting on its own to lift the minimum wage, and it is doing it in a unique way: The U.S. average will be 10.76 an hour, but will be adjusted in different ways for cost of living. Ikea workers in Woodbridge, Va., will get the highest, at $13.22 an hour. Workers in Pittsburgh and West Chester, Ohio, will get the lowest, at $8.69.

Massachusetts is on track to have the highest state minimum wage, taking it to $11 per hour by 2017, up from $8 today. Seattle plans to raise the minimum hourly wage to $15 from $9.32. Businesses with fewer than 500 workers have until 2021 to phase it in.

On average, Ikea’s pay change will be a 17% increase, the company said.

Cities are leading the way in tackling minimum wage issues, says a New York Times report. What is most interesting is the argument that connects higher wages and the health of the cities. Click here.

Here’s a discussion mixing statistics, experiences and politics about minimum wages by an economist and published in The New York Times. Click here.

An Oxfam America report details the congressional districts with the poorest wages, with maps by district that show the greatest needs are in the South. The average district shows that 19 percent of workers earn less than $10.10 an hour, the proposed federal minimum wage.  Click here.

By Mary Babic, regional communications officer for Oxfam in the US.

Slicing cheese at a grocery store, scrubbing toilets in a dorm, making copies in a real estate office, walking dogs, changing diapers, cleaning houses… yes, I’ve worked my share of low-wage jobs. For days, weeks, months. Clock in, log the hours, clock out. Take a shower, sit down on the couch, fall asleep.

I actually enjoyed these jobs a lot. There is great satisfaction in doing a simple, necessary task well, and with other people. And the best thing about the work was the other workers. Most were women: moms and grandmas, intelligent, funny, resilient, enduring, and accepting.

In the world of dead-end jobs, I was a tourist. I wasn’t staying. I flew in, did the work, and then flew out. I had good luck: My folks were born poor, but got through college on the GI Bill and scholarships, secured solid middle-class jobs back when they paid enough to enable you to buy a house and save for college and retirement. They sent me to college and then grad school. I’ve worked these jobs, throughout my life, as a way to keep alive for a while and tide me over.

But these women are not going anywhere. They stay, and they work, harder and harder every year, for wages that decline in value every year. END_OF_DOCUMENT_TOKEN_TO_BE_REPLACED

These are people and voices from a Huffington Post survey of those struggling in the economy. Click here.